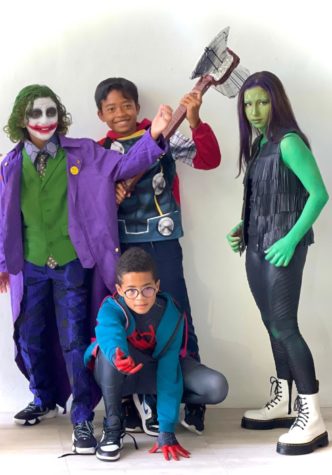 From September 11th to 12th comic fans, cosplayers, anime fans, and movie fans came together for Supercon. A select few students from Miami Country Day School went to Supercon and had the rare opportunity to observe the many wonders of Supercon and to meet famous international celebrities.

Sixth grader Bruno Karides actually went to Supercon with a few friends from our school. Bruno went to Supercon cosplayed as The Joker. According to Bruno there were multiple celebrities there, John Cena being the most famous among them. He said that there was also a large number of voice actors from a variety of T.V. shows and popular films. “There were a lot of celebrities and voice actors. There were mainly shops but there were also panels where comic book raters, and movie producers would talk. Also, there were autograph signings and photo sessions and you could get their autograph or get a photo with them. It was so cool! I met John Cena. It was very fun!” Supercon provides people with the opportunity to meet the stars of their favorite series as well as other fans.

Supercon is also the home of some of the most elaborate, intricate, and astonishing cosplays! Some people spend months working on their specialized costumes for such occasions.  According to Bruno Karides,“There were different types of costumes. Some pretty cool stuff!” This grand convention hosted people from all parts of the country, from as far away as LA. People come to sell original comic books from authors long gone. Others come to display their artworks, to show off their fascinating attire, and to meet famous celebrities. A legion of fans and supporters attend such events.

Ashton Michaels went to Supercon with Bruno Karides. He cosplayed as Miles Morales from the 2018 film Spiderman Into The Spiderverse. Ashton said that, “There were weapons stores there (props), you could buy paintings, and different collectables too. There were a lot of spider men including me, lots of Wandas, some D.C. characters like Harley Quinn, and some people as characters from Suicide Squad. I really liked a lot of the spider men and I feel like many people put a lot of detail in their costumes. It’s hard to pick a certain favorite.”

Supercon truly was an amazing experience for those who went,“I met John Cena and I took a picture with him. I got his autograph. I walked around, bought stuff, took pictures with some other spider people, and hung out with my friends. I liked the really detailed costumes and a lot of the stuff they had for sale was really cool, like the light sabers. The best thing was probably that I got to hang out with my friends and we could basically be superheroes. It was amazing and I want to do it again.” Supercon allows people of all ages to be a different person just for a day. People can meet new people, see new people, and be new people. You can wield a lightsaber like Anikin Skywalker and you can wield Mjolnjir like Thor. You can meet your idols and find something amongst the treasures found within Supercon.

Vessantino Adinata Malikilfajri, otherwise known by his peers as Malik, also attended Supercon. He went to Supercon cosplaying as the Marvel version of Thor, god of thunder.  “There were comic books, art, and people in cosplay. I’d say the best costumes were the Deadpool costumes, or Spiderman costumes”, said Malik. “I didn’t have the opportunity to meet any celebrities. I went around and bought funko pops mostly. It was very fun. I’d say the most interesting things were the cosplays and art. The best part about it was being with my friends and seeing cool cosplays.”

Supercon is an amazing gathering for people interested in fantasy and comic culture. The event draws artists, merchandise, and fans for several days of sharing their passion for these stories. Unity comes in all shapes and forms and community can come from anywhere. Anybody can be a part of it, even you.