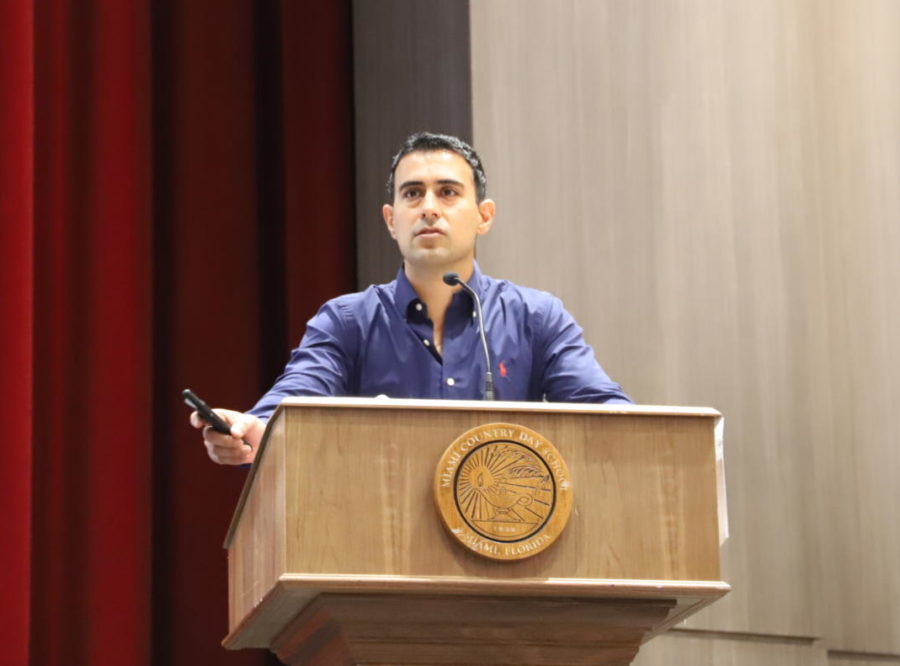 Nima Rouhanifard, the principal for the middle school students at Miami Country Day, School has a very intriguing past.

Rouhanifaurd was born in Iran and lived there until he was about four years old. Like many others, he left Iran with his family around the time of the Iranian Revolution.

Since Rouhanifard left at such a young age, his parents often remind him of why they all moved to America. The move gave Rouhanifard and his family a blessed opportunity to have access for an excellent education and a wide range of freedom in the United States.

Rouhanifard mentioned that he vividly remem- bered seeing a few things from back home when he lived in Iran, such as his swing set, and the beautiful garden he had at home.

Rouhanifard said that he was scared of the guards and seeing their uni- forms. Imagine see- ing those guards at such a young age with the thought of something terrible happen- ing to you, your family, and many others living around you.

rights taken away from them during the revo- lution, Rouhanifard and his family knew when it was time to immigrate from to the United States.

Rouhanifard’s family moved to Tennessee where he learned his native language, Farsi, and pursued his education.

He went to the University School of Nashville for high school, then attended Vanderbilt Uni- versity and graduated in 2004. After finishin g his education, Rouhanifard began his teaching

career. The program he first got involved in was “Teach for America” which was a two year commitment.

After Rouhanifard’s first experience with teach- ing, a passion for teaching was born. Instead of going into finance (his original career choice), Rouhanifard and a group of others opened a middle school in New Jersey. He remained there for about 10 years.

Rouhanifard first made the decision to move to Miami when he got engaged to his fiance who was living and working in Miami.

During this time, Rouhanifard still remained in New York. He and his fiance had to make the decision to remain in either New York or Miami. After sorting things out, Rouhanifard’s school in New York City created a job so that he could move to Miami.

He quickly realized that he didn’t feel like being in a “virtual space” because he was never able to see people nor was he able to see different forms of sports, community, assemblies, or opportunities where a big group of people could be together. Rouhanifard was then introduced to the head of MCDS, Mariandl Hufford, who showed Rouhanifard around the campus of our school. After touring the school, Rouhanifard was fascinated with the sense of community here at MCDS and made the quick decision to switch from his spot at his school in NY

Nima Rouhanifard has changes in mind to expand opportunities for students

Rouhanifard explained that the upper school currently runs an X-term program in which classes are shut down for a week, and students have a chance to travel around the world, meet professionals in the industry, and participate in different gateway programs.

The middle school board is also making plans to change yearly electives to semesterly electives. This will provide students with more choices and will help them to expand their education.

Rouhanifard is grateful to be able to share his story and his family’s journey; he stated that there are many families who have immigrated to the United States to escape governments who don’t allow them to have the same opportunities in their own countries, and that having an education is a very powerful thing to have in the USA.